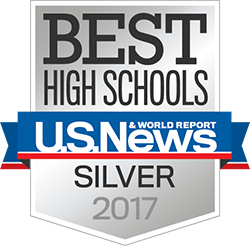 For the second year in a row, Bergenfield High School has been ranked among the top 4% of high schools in the nation by the U.S. News & World Report in the 2017 Best High Schools survey. BHS was recognized as being the 37th best high school in the state of New Jersey, and the 8th best in Bergen County, behind only Bergen County Technical High School Teterboro, Tenafly, Northern Highlands, Ridgewood, Park Ridge, Ramapo, and Leonia.
U.S. News & World Report published the 2017 Best High Schools rankings, a detailed analysis of more than 22,000 U.S. public high schools. Less than 30 percent of the schools were awarded gold, silver, or bronze medals, with BHS receiving silver in this year’s report.
The Best High Schools rankings feature data on a number of factors. A four-step process was used to determine the Best High Schools. The first three steps ensured that the schools serve all of their students well, using their performance on the math and reading parts of their state proficiency tests and their graduation rates as the benchmarks. For those schools that made it
past the first three steps, a fourth step assessed the degree to which schools prepare students for college-level work.

In addition to the national rankings, U.S. News has published rankings of the top schools in each state, as well as the Best STEM Schools, Best Charter Schools and Best Magnet Schools.  The rankings are produced in conjunction with RTI International, a global research firm.
“We are extremely proud to be recognized for our hard work and know that there is still much to do,” said Christopher Tully, Superintendent of Schools. “Our world class faculty continues to raise the bar by providing a rigorous education to our students, and they are answering the challenge.”
For more information or to see the full list of ranked high schools, visit
http://www.usnews.com/education/best-high-schools.
Facebook: www.facebook.com/BergenfieldSD
Twitter: www.twitter.com/BergenfieldSD